Those 3 words used to conjure up images of gnashing teeth and serious screams (except when it was about me going to bed.) I've mentioned the trouble we had with Chanbe's sleeping habits before, and I just kept saying that if we had a routine, things would be better.

When I was lying on the floor in KMart, after hearing an audible crack come from my foot as I fell, I just kept thinking "this is the worst thing that could possibly happen right now." But you know what? It turned out pretty darn well. Yes, I had to have a cast and a boot and/or be on crutches for the better part of 3 months, but this gave Chanbe a time to settle in to a house for more than a week or 2 at a time. And it has done wonders for his sleeping. More than I could ever have imagined.

Now when bed time comes around, one of us takes him to his cot, puts music on, lies him down and says "sleepy time" and, this is the best bit, WE JUST WALK OUT OF THE ROOM!!! No more patting to sleep, no more tears (most of the time anyway) and often, even if he doesn't go to sleep straight away, we can hear him talking to himself and amusing himself until he can't keep his eyes open. And get this. At night he'll sleep from 7pm (ish) til 6:30am (ish). Yes. We have one of those kids now! It is absolute bliss and it also means we can have dinner at a reasonable hour now.

So, as it turns out, breaking my foot was the best thing for our little guy. Let's hope I don't need to break anything else for toilet training... 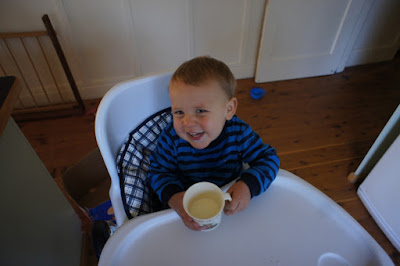 Posted by Renae at 2:56 PM Comments