This was our last day with Sally (original, I know) and it was a beautiful day for driving. We set off around 9:15am for our last leg on the road and enjoyed every beautiful minute of it. Hubs had been trying to get this shot (unbeknownst to me) for 3 weeks and he FINALLY got it on our last day! 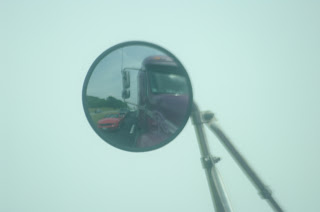 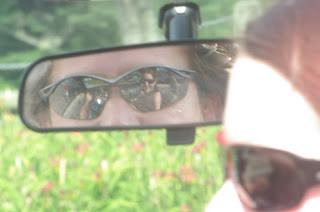 We stopped for lunch at some random truck stop along the way and had delicious burgers and iced tea and then we hit the road again. We then stopped at a rest stop for one more round of photos.

Aaaaah Sally. You gave us a great ride you sexy thing, you! 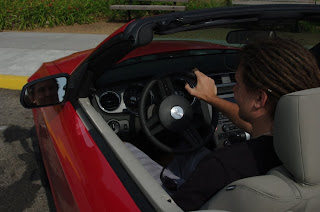 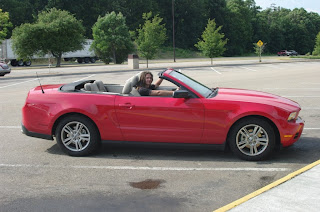 We didn't really want to be getting into Washington too late as to avoid the peak hour traffic, and this is what we witnessed coming OUT of town: 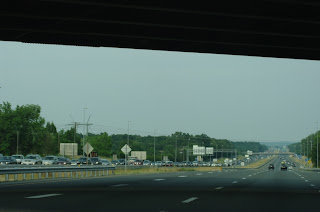 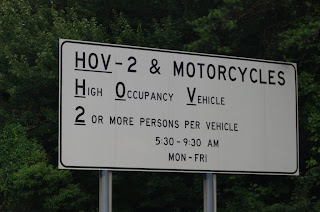 As we got further into town, I started getting nervous as we still had the top down and I'd heard lots of bad stories about violence in Washington D.C. (Almost as helpful as "careful of the bears"...) Hubs thought I was being ridiculous, as it was still day time (about 7pm I think??) and there were people EVERYwhere. Actually, my first impression of DC was that it was really pretty and lots of fun! Regardless, I still "made" Hubs pull over to put the top back up.

I then tuned in to the local radio station and heard this:
"Following the shooting on Louisianna Avenue this afternoon, the following roads have been affected...."
Hubs: "What street do I need to turn down?"
Wifey, looking at the map: "Ummmmm... Louisianna Avenue...." *gulp* 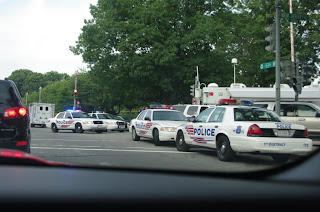 We drove right past all the commotion and I tried ever so discreetly to take these photos. And I was like "well, if they shoot me, it will be one HELL of a story! HA!" We arrived at the hostel with minimal fuss thanks to my awesome navigating (I'd come a long way since Day 1 in LA) and Hubs' brilliant driving and general ability to stay calm.

We checked into the Capitol City Hostel which I had pre-booked (incidentally it was only one of 3 or 4 hostels in DC and the ONLY one that had beds available for both of us for the entire stay) and were very warmly greeted by the owner, Bill. The hostel boasts free peanut butter and bread and milk for all guests, which of course is a great selling point! Ahem, shame about the cleanliness. Oh well. It was only for a few days! (The comments on that link were made in 2006. I don't think it's been properly cleaned since!!)

We decided to just have a night in with the residents and had some pretty good chats to a few cool people. Gosh I don't even remember what we had for dinner. Peanut butter on toast perhaps?? We had to drop off the car first thing in the morning so it wasn't a big night. I felt like this was the start of another adventure for us without Sally, and I couldn't wait for it to start!