Ever since I moved to Edinburgh for a year when I was 22 years old, I've wanted a local coffee shop. One where I can walk in, greet the owners by name, have them do the same in return, and ask "the usual, Wifey?" After almost a decade of wanting this, it has finally happened, and it's everything I hoped it would be. The only difference is, I don't have a "usual". 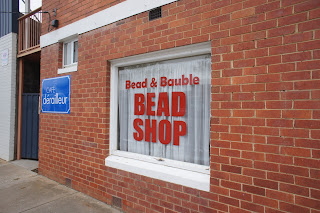 I first went to the bead shop not long after we arrived in Wang, when it was just a bead shop. It's on the way in to town and I do love beads! They have some really beautiful stuff in there and it was always worth a look. And then came the coffee... Our friends introduced it to us back in October but it wasn't until this year that we started going there regularly. After about half a dozen visits, the owner, Eric, introduced himself to us while he was clearing one of the tables outside, and asked our names. After that he would always address us by our names and give us a big welcoming smile.

Now I like to think we have even become friends. He and his wife Lauren run the place brilliantly. Lauren is the Queen Bead (see what I did there?) and also helps out in the cafe at busier times, and Eric does a bit of everything - makes coffee, cooks lunches and slices, and on Saturday mornings, he makes these: 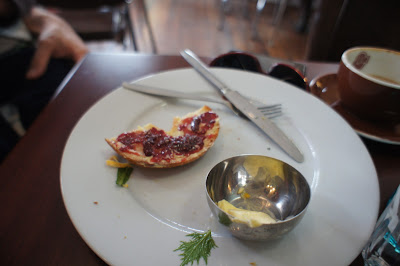 I was going to take photos of the bagels before we ate them, and the coffees before we drank them, but they were just too delish and I forgot! The secret to their cappuccinos? Real chocolate sprinkles on top, some of which can be found at the bottom of your coffee cup at the end. (I had already eaten them before I took the photo!) 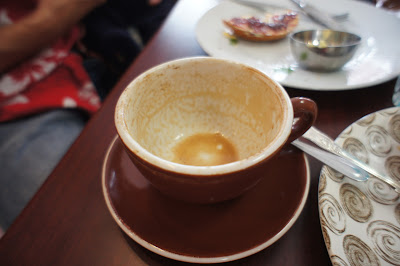 Lauren couldn't believe how big Chanbe is getting, and brought him out a high chair so he could "have coffee" with us. It's the little things that make the big impressions at this place. 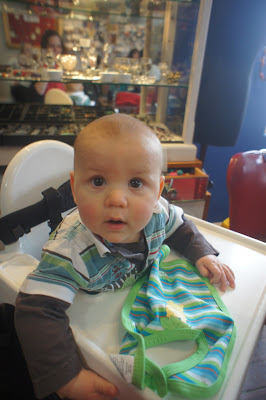 Chance isn't quite ready for the babycinos yet, but he was pretty taken with Dadda's bagel!

This was the first time we went for bagels and they didn't disappoint! Hubs and I probably have coffee there once or twice a week (at least!) and the coffee is so good. Every Time. And they're ALL good. Whether you want a cappuccino, iced coffee, affogato, iced chocolate, hot chocolate, chai tea, chai latte....

So come on down and we'll take you there some time!

Posted by Renae at 1:14 PM Comments