I should be napping...

We had a pretty rough night with Chance last night, and he's having a very good nap at the moment. I know I should be too, but there's just too many other fun things to be doing! Like catching up on my Google Reader, reading my emails, and sitting on the couch drinking coffee, enjoying my view.

We all arrived back home to MB late Saturday night (about midnight!) and had a really great relaxing day yesterday in preparation for Hubs' first day at his new position today. We left Brisbane on Friday which was a bit sad, but we had a lovely time visiting, although it was bitter sweet. It was so lovely seeing Hubs again after almost 2 weeks away. We headed over to Nathan and Cal's for dinner and sleepover which was, as always, lovely and relaxing. We had a bit of a sleep in Saturday and after some brekky, headed over to Uncle Wayne and Aunty Alida's for lunch. And boy were we in for a treat!

AA knows how much we love home-made gnocchi, so that's what was on the menu! We were lucky enough to get there while it was all being prepared, so I was able to get some handy hints for my next attempt. 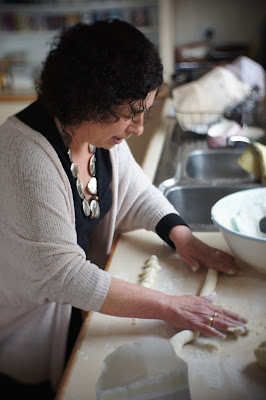 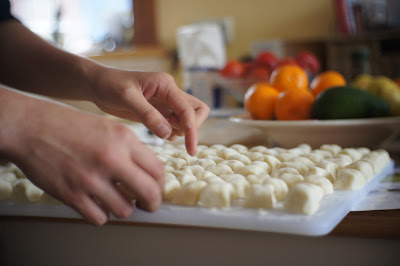 Served with a tomato sauce (home made too, of course!) 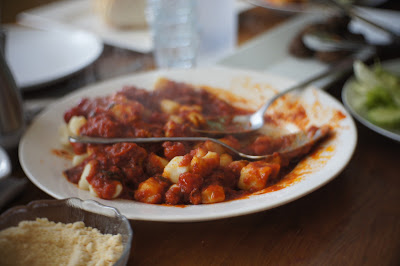 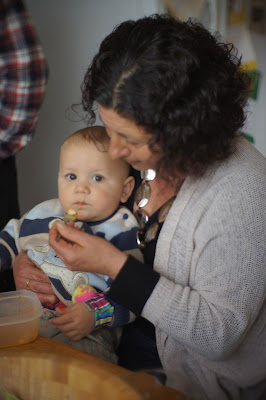 After lunch (which included tiramisu for dessert!) we headed to Albert Park to watch Chance's Godfather, Dr Luke, play a friendly game of footy. Not long after we arrived, one of the guys was injured so they asked Hubs if he'd like to play. Would he ever! 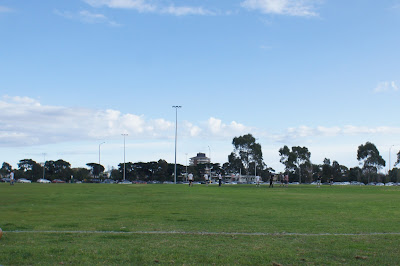 (That was a pretty dumb photo to take - Hubs is out there somewhere!) Hubs had a great time, and although he got a bit battered and bruised, it was good to have a run around with the guys. He helped set up a goal and made a few good tackles, including one on Dr Luke! We cheered on from the sideline on a lovely Melbourne afternoon. 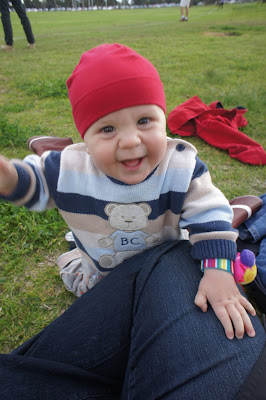 It must have been our cheering, as Dr Luke kicked a total of 15 goals! 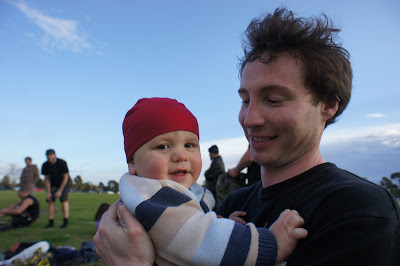 We left the park around 5pm and headed to Wangaratta for dinner with Kyra and Stephan and Frederick, arriving around 8pm. We were treated to delicious lasagne, salad and garlic bread. It's always so hard to leave their house and the time flies by so quickly! We dragged ourselves away at 10pm and after a fuel stop, got home at 11:45pm. We collapsed into bed and Chance had a pretty good night so that meant we did too.

After such an emotional, albeit wonderful 2 weeks in Brizzie, the day of family, friends, and great food, was just what I needed to lift my spirits.

Chance has been asleep for over an hour and a half now, and it's almost time for lunch. (Looking at those gnocchi photos has made me hungry!) And the sun has come out, so we might go for a walk after we eat. This is the view I'm looking at right now. Pretty nice, huh? 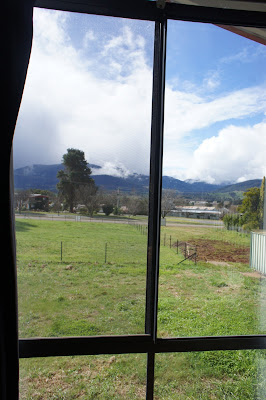