A few weeks ago, our friend Ian came down for a visit. He's been threatening to come down for a year and phoned us on a Wednesday to tell us he'd be here Friday night til Sunday! So we booked him in for Saturday afternoon and evening and looked forward to it with great anticipation.

About a year ago, Hubs and I went on a winery tour with our friend Nate, and one of the bottles we bought was a Verdhelo from Sticks Winery. We had been saving it for Ian's visit as we knew that was one of his favourite varieties of wine so of course, we had to buy some cheese and bikkies to go with it! 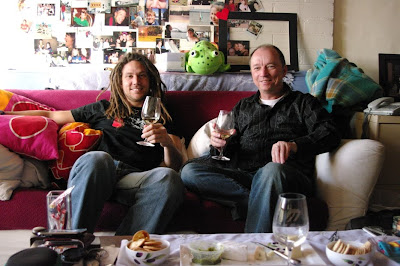 We headed out to Hardware Lane, as Ian is our jazz buddy and there's live jazz at Hardware Lane most nights. There are also LOTS of restaurants and way too many spruikers. Business is obviously slow EVERYWHERE as we were offered free bottles of wine, Cosmopolitans, beers and bourbon to try and convince us to dine at a number of places. We opted for a place called Pop.

It had no Pop.

The free bottle of wine was actually really nice, and about $40 on the menu, but we were right in the middle of the 2 groups playing jazz so we couldn't really hear either of them which was disappointing. The food and service weren't really up to scratch so we decided to look for somewhere else for dessert.

We went down to Block Place which is a neat little lane way in between the Collins Streets (little and big) and went to Caffe e Biscotti for a night cap. Hubs wanted "something different" to drink so the bartender took full advantage and made him a Frangelico, Kahlua and lime. I won't disclose the cost, but it was a delicious drink! Ian had a liquer coffee with Cointreau and I had a port. 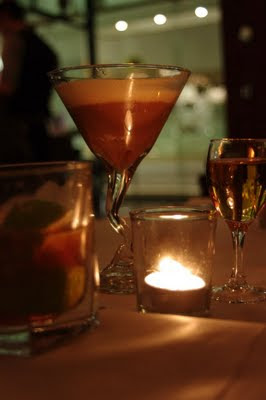 The drinks really were lovely but not something we could afford regularly!! We also ordered a stack of pancakes to share which were delicious, but the best thing about this place was the little jazz band outside! They were great and really added to the atmosphere of the place. The service was good and it's somewhere I'd like to go back to try the meals. But definitely only for a special occasion.

A great night out in Melbourne!