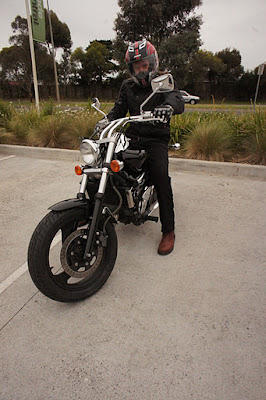 Did you guess?? So yeah. Now my Hubsband rides a motorbike. I guess he felt like he had too much free time, what with studying/working full time, raising an (almost) 1-year-old, being an attentive wonderful Hubs, gliding on weekends.... Ha!

Hubs first broached the subject of getting his motorbike licence a few months ago, and at the time I thought that it would be something that would happen in the next year or 2. Instead, it happened in a few months. He did a course and got his learner's permit, and in Victoria, that pretty much means you can get yourself a bike and ride on your own. Crazy, no?? The learners course is in a carpark at the Wangaratta airport. No traffic and no speeds over 30kph. And all of a sudden they're allowed to ride a motorbike up to 650CC in the big wide world??????

So then it was time to look for a bike. Hubs jumped onto eBay, and Hubs being Hubs was quite taken by a couple of fixer-uppers (or "orphan bikes" as my Dad calls them) but I suggested that could be something he looked into later down the track when he has an actual garage to do the fixing up. And then he found it. A 2006 Kawasaki Eliminator. Who on earth had the great idea to call a motorbike an Eliminator. As if I'm not scared enough!!

And the icing on this danger cake of insanity? We had to pick it up from Melbourne. 350km away. So we left Chanbe behind with my parents who are staying with us at the moment, and set out on Sunday at 8:30am. We made it to Melbourne in great time and was at the guy's place at 1pm. Hubs took it for a burn safe ride around the back streets to get a feel for it, and we were on the road. Well, kind of. It took us 20 minutes to go about 2km because of Melbourne traffic, and we weren't even in town!! I was in the car following Hubs and I don't know that I have ever been more terrified in my life. But he navigated his way beautifully and we were soon out of the busy traffic and onto the safety of.... the freeway.

We arrived at the motorbike accessories shop and I started to calm down a bit. It seems that Hubs is a bit of a natural. He looks like he's been riding for years, and he loved the freeway riding - much less stressful than being in the middle of traffic. We suited him up with a new helmet, jacket, gloves and pants. He sure does look the part. We then started to head home. It was 3:30pm by this stage, and by the time we stopped a couple of times for fuel, and for a rest in Wangaratta, we didn't get home until 9:30pm. It was a ridiculously long day, and we were both happy to be back home.

I must admit that I love it. I'm not saying that I'm not going to worry every time he gets on and rides away, but there's something very sexy about a man on a motorbike, oui? 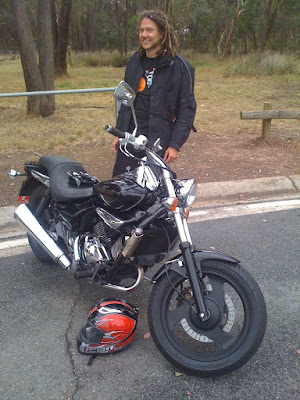